Empathy and Freud: Lost in translation

Freud is explicit about his commitment to empathy. He writes and publishes the following:

It is certainly possible to forfeit this first success [in therapy] if one takes up any standpoint other than one of empathy such as moralizing (“Further recommendations: On beginning the treatment.” Standard Edition of the Complete Psychological Works of Sigmund Freud, Volume 12: 121-144. : 140).

Unfortunately no one knows that Freud wrote that, because it is literally lost in translation. In translating “empathy [“Einfühlung”] from the original German, Alix Strachey writes to James Strachey: “In any case, it’s a vile word [“empathy”], elephantine, for a subtle process.” The words “sympathetic understanding” were chosen as the translation in this case. The rest, as they say, is history; except that it is like Russian history when Stalin had Trotsky’s photos literally cut out of the history books of the Russian Revolution. Talk about repression!

Freud’s method was an empathic one, and the dispute, if any, is not that Freud did not use or value empathy. He did. Freud applies empathy in his clinical practice, even when he does not use the word “Einfühlung.” Freud balances his commitment to empathic methods even in the face of the boundary issues of C. G. Jung and S. Ferenczi with their women patients, where Freud took the moral high ground, counseled the need to be dispassionate and “like a surgeon” in neutrality, anonymity, and (above all) abstinence. However, that may all be well and good in practice, but how does that work in theory?

In theory Freud limited his explicit mentions of “empathy.” The reason is Freud’s definition of “introspection.” Introspection is distinct from empathy, but closely connected to it. One dominant modern definition of empathy is “vicarious introspection” (Kohut 1959), where introspection is the royal road to empathy. Introspection is an anchor, making available the spontaneously arising vicarious feelings that are further processed by empathic understanding and interpretation into an empathic response. Yet Freud did not make such a distinction. Rather Freud defines “introspection” in terms of the self-observation of the conscience (one aspect of the superego), that is, as a form of self-criticism and censorship.

In this quotation, empathy is distinguished from “moralizing.” This is a casual reference but a potentially revealing one. By “moralizing” one understands Freud to mean the use of “approval” or “blame” as means of influencing the course of treatment. The exclusion of an ethics of empathy does not rule out the use of empathy for recognition of the humanity of the other person. In this sense, empathy implies a respect for the autonomy of the other which is inconsistent with any attempts to manipulate him by means of approbation and punishment. It is important to keep open a space for the ethical implications of empathy without indulging in “moralizing” in the narrow sense.

As noted,, this is also the text in which “Einfühlung[empathy]” is mistranslated by Strachey as “sympathetic understanding,” thus further obscuring the critical role that it takes in Freud’s practice. Contrary to Strachey, Freud takes significant effort to distinguish “empathy” from “sympathy.”

The effort to distinguish “empathy” from “sympathy” continues in Freud’s “Preface to Aichhorn’s Wayward Youth”(1925: 273). Sadly, so does the mistranslation. Freud acknowledges the contribution of August Aichhorn in working with troubled adolescents: “His [Aichhorn’s] attitude to his charges sprang from a warm sympathy with the fate of those unfortunates and was correctly guided by an intuitive perception [“intuitive Einfühlung” = “intuitive empathy”] of their mental needs.”

The use of “intuition” here is not the over-intellectualization about which Kohut cautioned (e.g., Kohut The Analysis of the Self: 302-305), but rather the recommendation to be guided in relating to the troubled adolescent by one’s perceptive personal reaction, a skill in which Aichhorn excelled.

. . . The self-criticism of conscience is identical with, and  based upon, self-observation. That activity of mind, which took over the function of conscience, has also enlisted itself in the service of introspection, which, in turn, furnishes philosophy with the material for its intellectual operations. This must have something to do with the characteristic tendency of paranoiacs to form speculative systems.

It will certainly be of importance to us if we can see in other fields evidence of the activity of this critically watching faculty, which becomes heightened into conscience and philosophic introspection (Recommendations for physicians beginning psychoanalysis, 1914: 96-97).

This definition of introspection as critical self-observation is far from the kind of introspection actually practiced by both the analyst and analysand. The latter’s free associations cannot be generated so long as the conscience is actively censoring one’s thoughts and discourse. The analyst does not deliberately concentrate his attention or listen for anything specific in the analysand’s free associations.

The analyst maintains an attitude of evenly-hovering attention, in which his tendency to “moralize”—approve or blame—is suspended. In this way, introspection on the part of the analyst can disclose vicarious feelings as well as memories analogous to those told by the analysand. In both cases, we have a kind of introspection without inspection (to coin a phrase), which conditions the arousal of empathic receptivity towards the latent content of the analysand’s unstudied associations.

In short, Freud’s methods and listening were highly empathic, and if one’s experience today is otherwise, it is only because something has been lost in translation – empathy.

“Okay, I’ve read enough; I want further details”: to buy the book or have your local library order a copy of this book or another of Lou’s empathy books go here: get A Rumor of Empathy: Rewriting Empathy [https://tinyurl.com/y24ps876] 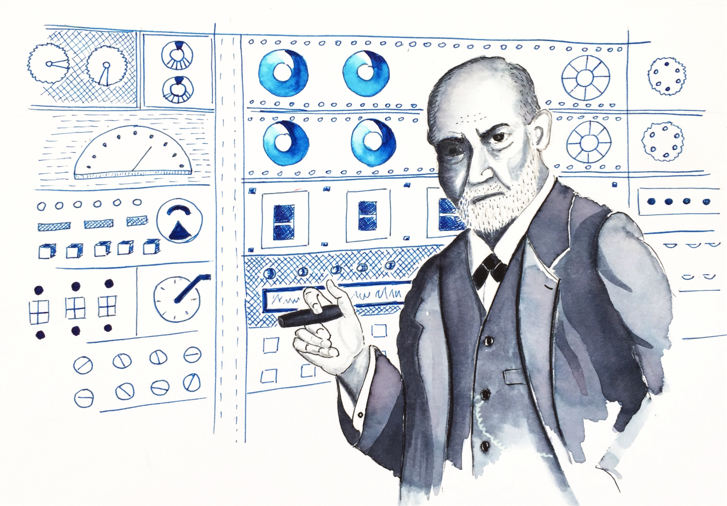 Freud’s empathy: Freud depicted in front of the empathy control panel: Empathy is a dial, not an on-off switch