Three books on empathy reviewed: The good, the bad, and the ugly 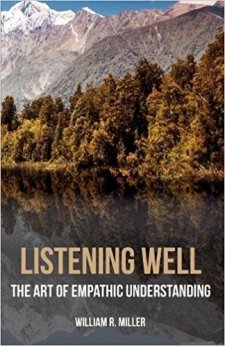 ($18US)) is a short book. Admirably concise. My short review is that, as I am author of three academic and one “how to” book(s) on empathy, this is the book that I wish I had written.

Listening Well contains the distilled wisdom of Miller’s several decades of practicing listening as the royal road to expanding empathy. Listening Well is a “how to” book, but the author is adamant that such a skill lives and flourishes in the context of a commitment to being empathic. (I hasten to add that, though Miller’s is the book I wish I had written, my own publications on empathy are significant contributions, and I shamelessly urge the reader to get them on the short list, too.)

Being with the other person without judgments, labels, categories, diagnoses, evaluations, and so on, is what empathy is about most authentically. It is not that such assessments do not occur. They do, but they almost always get in the way. Listening Well is way too short to be a textbook, but I can see it as being useful in a workshop, seminar, or as exercises in a class.

In case you are unaware of William Miller’s background, he is the innovator behind Motivational Interviewing. Listening well – the practice, not just the title of the book – is at the heart of this approach. In turn, the practice of listening well is based on empathic understanding. Miller is explicit in invoking the work of Carl Rogers (1902 – 1987) Rogers was one of the founders of humanistic psychology, and Rogers’s person-centered psychotherapy provides the foundation for this results-oriented intervention.

Cris Beam is a would-be “bad girl,” who has written a very good book. In a world of constrained, limited empathy, the empathic person is a non-conformist. Beam is one of those, too, and succeeds in sustaining a nuanced skepticism about the alternating 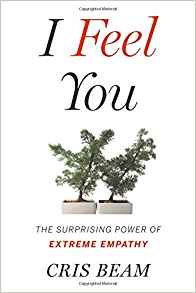 hype and over-valuation of empathy over against those who summarily dismiss it. Most ambivalently, she calls out the corporate infatuation with empathy. I paraphrase the corporate approach: Take a walk in the other person’s shoes in order to sell them another pair.

In Beam’s book I Feel You: The Surprising Power of Extreme Empathy (Houghton Mifflin, 251 pp. ($26 US$)), Cris Beam makes empathy present. She brings forth empathy her engagement with difficult cases that challenge our empathy, including her own conflicts. In the process of struggling with, against, and for empathy, she succeeds in bringing forth empathy and making empathy present for the reader. From an empathic point of view, I can think of no higher praise.

It gets personal. Beam reports that she is a survivor of a floridly psychotic mother and a father who, at least temporarily (and probably to save himself), abandoned Cris to her fate with that woman. As a teenager, Beam escapes to her father and his second marriage only to be rejected when she “comes out” as a lesbian some years later. Fast forward to Beam’s own second marriage [both to women].

Beam’s partner announces that the partner (at that time a “she”) is committed to transitioning to becoming a man. Beam decides to support her (becoming him) and sticks with it through the top surgery, administering the testosterone shots. The partner tells Beam: “I will love you always [regardless of my gender].” Beam decides to believe the partner. (See what I mean? You can’t make this stuff up.)

Nor is this a softball review, and I decisively disagree with Beam when she says that empathy is “mutual vulnerability” and approvingly quotes André Keet: “there are no neat boundaries between victim, perpetrators, beneficiaries, and bystanders …” (p. 191). While such a statement is descriptively accurate, once the father walks, leaving the psychotic mother and child behind, the commitment of empathy is to respect boundaries and (re)establish them when the boundaries have broken down or been violated.

Empathy is all about boundaries, and Beam, like so many of us, has her share of struggles with them. No easy answers here. But one final thought as my personal response to Beam’s thought provoking and inspiring work on empathy. We may usefully consider the poet Robert Frost: “Good fences make good neighbors.” I add: There is a gate in the fence, and over the gate is written the word “Empathy.”

The third empathy book, The Routledge Handbook of the Philosophy of Empathy (Routledge, 410pp, $245 US$), has a truly ugly hardcover price of $151 even after the Amazon discount as publishers continue to respond to economic pressures by 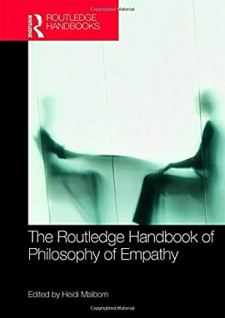 Cover Art: The Routledge Handbook of the Philosophy of Empathy

squeezing the life out of traditional print books that one can hold in one’s hand. The recommendation? Have the library order a copy (the paperback is $54.95, a better price, but nothing to write home about).

I have read, reviewed, and sometimes struggled, not only with the tangled history of empathy from David Hume to mindreading to mirror neurons, but with all thirty-three articles as a would-be empathic contribution for those who come after me. In many cases, I resonated empathically with the article. Bringing a rigorous and critical empathy to the article based on my life and experiences, sometimes the article “clicked,” i.e., worked for me. In other cases, I had to activate “top down” empathy, trying to create a context for a conversation, in which all I can otherwise see is an effort to maximize the number of stipulations that can be made to dance on the head of a pin—the pin being “empathy” (seems like about two dozen).

In every case, I try to be charitable; but in some cases the “empathy meter” goes in the direction of “tough love.” In one or two cases, I acknowledge my empathy breaks down completely in the face of academic over-intellectualization—an obvious occupational hazard in philosophy, but one that needs to be firmly contained in an engagement with a critical and rigorous empathy—and I simply recommend hitting the delete button—or a rewrite from scratch.

A “Handbook” promises to be a comprehensive engagement with the issues. So it is with deep regret, that I call out the fundamental incompletenesses. Nothing on education. Philosophers are not educators? Socrates was not a teacher? Mary Gordon’s program The Roots of Empathy (also the name of her book) includes bringing a baby into the grammar school classroom. Too developmental? Too psychological? The Philosophical Baby (Gopnik et al 2009)?

The evolutionary context of empathy is considered; but missed are the role of the human mother-child matrix in the development of affective empathy, the empathizing effect of female sexual selection on male aggression, and the development of perspective taking in group selection in empathy as a “cheater detection system” and “empathic cruelty.” Empathy and morals are well represented; but little about social justice, overcoming prejudice, building bridges between disparate individuals and communities, or the tough related issues.

I am just getting warmed up here. Other incompletenesses are more fundamental—methodological. Empathy is not just the object of the inquiry, but it also needs to be the subject of the inquiry. We get our humanity from the other individual—and the other’s artistic expressions and social contributions.

Instead empathy is on the defensive in too many places in the Handbook under review. Empathy is not represented as something of value that needs no apology and is worthy—along with (say) compassion and motherhood—of active promotion and expansion as a benefit to the community. Strangely enough, the breakdowns, failures, and misfirings of empathy—emotional contagion, conformity, projection, and communications lost in translation—are mistaken for empathy itself as if empathy could not misfire or go astray.

Nevertheless, bright spots appear. As Shoemaker points out in his article, the solution to a so-called parochial empathy that is limited to the “in group” is empathy itself – expanded empathy. Expand the boundaries of the community to be inclusive of those previously excluded. No doubt, easier said than done, but that is not a limitation of empathy itself, but of our need for expanded training and practice of empathy.

The battle is joined. Dan Zahavi, an otherwise impeccable and astute phenomenologist, enters into apologetic worrying about the conundrum: Can we really ever appreciate, understand, empathize with another person’s experience without having had a similar experience [or words to that effect]? Zahavi makes good use of Max Scheler to show that we can. With the exception of Jenefer Robinson (on “Empathy in music”), what is not called out (or even hinted at) is that the encounter with the other person, art, music, and literature enhances and expands our empathy.

In a world of limited empathy, the empathic person is a nonconformist. I wish I could write this Handbook is overflowing with nonconformists. Happily there are some and they produce several excellent articles—Zahavi, Gallagher, Ickes, Denham, Debes, Hollan, and John (Eileen); but it is otherwise filled with over-intellectualization, stipulations, neurohype, inaccurate phenomenological descriptions (mostly by the neuro-philosophers, not the phenomenologists), and tortured conceptual distinctions lacking in empathy. Seven out of thirty-three is a modest harvest.

One expects a Handbook on empathy would make empathy present for the reader. In the long, dreary march through 397 pages, thirty-three articles, I thirsted for it. Eileen John comes closest to doing so, and she is able to marshal the resources of empathy in the context of literature to help her get over what is admittedly a high bar. The scandal of this Handbook is that amid so many conceptual distinctions relating to empathy, empathy itself—empathy as a presence in the encounter with the reader—goes missing except in this one out of thirty-three articles.

What I am saying is that, with a few exceptions, largely concentrated in the contributions of Heidi Maibom and issues with her editing, there is nothing wrong with this Handbook; but there are so many things missing it is hard to know where to start with them. The practice of empathy is the source out of which emerge the ten thousand empathic distinctions in this Handbook. Key term: practice. Thinking and writing informed by the practice of empathy is the ultimate missing link.

Reviewing each of the thirty-three articles in the Handbook requires a book length treatment in itself. Therefore, I have provided one entitled A Critical Review of a Philosophy of Empathy (Two Pairs Press, 162pp. $10US (Amazon)), in which extensive background on the issues is also engaged. In short, this is a book about the book, and is the complete book review. Each of the articles is reviewed in detail with a seven separate and substantial sections orienting the reader to the issues, pro and con, engaged under core problems, history, understanding (mindreading), morals, aesthetics, and cultural issues, all relating to empathy. The recommendation? Check out the review, priced to cover printing plus a latte and biscotti for the reviewer, prior to engaging with the Handbook. You may get 80% of the value in the review; and you will not be bored.

Complete, expanded Review of Cris Beam’s I Feel You: The Surprising Power of Extreme Empathy: Review-of-Cris-Beam-I-Feel-You-Extreme-Empathy

Completed, expanded Review of Lou Agosta’s A Critical Review of a Philosophy of Empathy: About-Lou-Agosta-A Critical-Review-of-a-Philosophy-of-Empathy